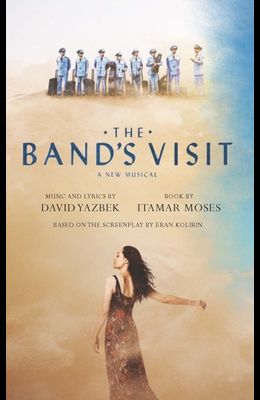 It's time to fall in love again One of the most ravishing musicals you will ever be seduced by. --New York Times
The best musical of the year has made it to Broadway --Wall Street Journal

Winner of four Best Musical awards, including the N Y Drama Critics' Circle Award, the Lucille Lortel Award, Outer Critics Circle Award, and the Obie Award
After a mix-up at the border, an Egyptian police band finds themselves stranded in an Israeli desert. With no bus until morning and no hotel in sight, these travelers are taken in by the locals and their lives are forever altered. Itamar Moses and David Yazbek 's stunning musical adaptation of the 2007 acclaimed film of the same title finds transcendence in the surprising and tender relationships that are forged under the desert sky.
Itamar Moses is the author of the full-length plays Outrage, Bach at Leipzig, Celebrity Row, The Four of Us, Yellowjackets, Back Back Back, and Completeness, and the musicals Nobody Loves You (with Gaby Alter), and Fortress of Solitude (with Michael Friedman). On television, he has written for both TNT's Men of a Certain Age and HBO's Boardwalk Empire. He holds an MFA in Dramatic Writing from NYU and has taught play writing at Yale and NYU.

David Yazbek is an American writer, musician, composer, and lyricist. He wrote the music and lyrics for the Broadway musicals The Full Monty, Dirty Rotten Scoundrels, Women on the Verge of a Nervous Breakdown, and The Band's Visit.

0
|   0  reviews
Did you read The Band's Visit? Please provide your feedback and rating to help other readers.
Write Review