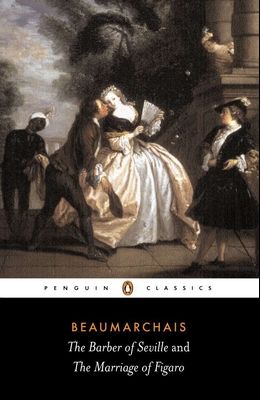 The Barber of Seville and the Marriage of Figaro

Book #1-2 in the Figaro Trilogy Series
by
Pierre A Beaumarchais and John Wood
$3.88
Select Format

The sparkling plays about the scoundrelly valet Figaro, used as the basis of operas by Mozart and Roissini

A highly engaging comedy of intrigue, The Barber of Seville portrays the resourceful Figaro foiling a jealous old man's attempts to keep his beautiful ward from her lover. And The Marriage of Figaro--condemned by Louis XVI for its daring satire of nobility and privilege--depicts a master and servant set in opposition by their desire for the same woman. With characteristic lightness of touch, Beaumarchais--a French courtier, secret agent, libertine, and adventurer--created an audacious farce of disguise and mistaken identity that balances wit, frivolity and seriousness in equal measure. For more than seventy years, Penguin has been the leading publisher of classic literature in the English-speaking world. With more than 1,700 titles, Penguin Classics represents a global bookshelf of the best works throughout history and across genres and disciplines. Readers trust the series to provide authoritative texts enhanced by introductions and notes by distinguished scholars and contemporary authors, as well as up-to-date translations by award-winning translators.

Figaro Trilogy Series In Order - By Pierre A Beaumarchais

Books like The Barber of Seville and the Marriage of Figaro

0
|   0  reviews
Did you read The Barber of Seville and the Marriage of Figaro? Please provide your feedback and rating to help other readers.
Write Review