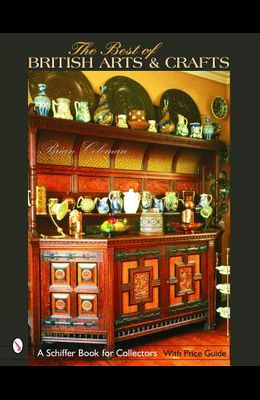 The Best of British Arts & Crafts

More than 100 years after the death of designer William Morris, the Arts and Crafts Movement is enjoying a revival, becoming more popular than it was during the late 19th and early 20th centuries. Attracted by its attention to quality and design, admirers-from Hollywood stars to young people furnishing their first home-are appreciate the designs from Morris, De Morgan, Dresser, Tinworth, Marshall, Barlow, Pearson, Bell, and many more. This new book celebrates the very best designs in ceramics, furniture, metalwares, and the fine arts. With over 250 color photographs it is a treasure trove of visual information. Some of the world's most renowned experts have contributed their scholarship, including Stephen Calloway, Francis King, Andrew Barlow, John Catleugh, Max Donnelly, Mark Golding, Harry Lyons, Barbara Morris, and Peter Rose. Honesty of purpose, fine craftsmanship, and respect for good design are as valued now as when they first became the tenets of Arts & Crafts philosophy in late-Victorian England. This book is a source of inspiration and education for collectors around the world.

Frequently Asked Questions About The Best of British Arts & Crafts

0
|   0  reviews
Did you read The Best of British Arts & Crafts? Please provide your feedback and rating to help other readers.
Write Review

List of All Editions of The Best of British Arts & Crafts