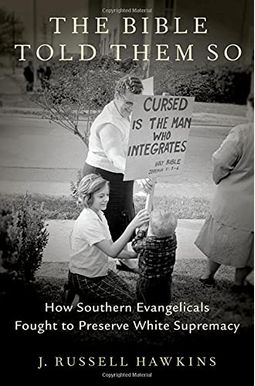 The Bible Told Them So: How Southern Evangelicals Fought to Preserve White Supremacy

Why did southern white evangelical Christians resist the civil rights movement in the 1950s and 1960s? Simply put, they believed the Bible told them so. These white Christians entered the battle certain that God was on their side. Ultimately, the civil rights movement triumphed in the 1960s
and, with its success, fundamentally transformed American society. But this victory did little to change southern white evangelicals' theological commitment to segregation. Rather than abandoning their segregationist theology in the second half of the 1960s, white evangelicals turned their focus on
institutions they still controlled--churches, homes, denominations, and private colleges and secondary schools--and fought on.

Focusing on the case of South Carolina, The Bible Told Them So shows how, despite suffering defeat in the public sphere, white evangelicals continued to battle for their own institutions, preaching and practicing a segregationist Christianity they continued to believe reflected God's will.
Increasingly caught in the tension between their sincere belief that God desired segregation and their reluctance to give voice to such ideas for fear of being perceived as bigoted or intolerant, by the late 1960s southern white evangelicals embraced the rhetoric of colorblindness and protection of
the family as measures to maintain both segregation and respectable social standing. This strategy set southern white evangelicals on an alternative path for race relations in the decades ahead.

Frequently Asked Questions About The Bible Told Them So: How Southern Evangelicals Fought to Preserve White Supremacy

0
|   0  reviews
Did you read The Bible Told Them So: How Southern Evangelicals Fought to Preserve White Supremacy? Please provide your feedback and rating to help other readers.
Write Review

List of All Editions of The Bible Told Them So: How Southern Evangelicals Fought to Preserve White Supremacy