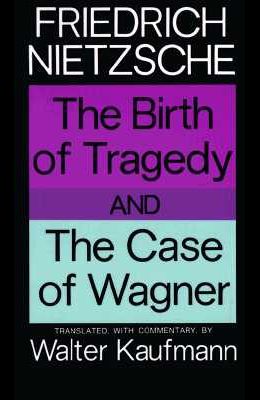 The Birth of Tragedy and the Case of Wagner

Two representative and important works in one volume by one of the greatest German philosophers.

The Birth of Tragedy (1872) was Nietzsche's first book. Its youthful faults were exposed by Nietzsche in the brilliant Attempt at a Self-Criticism which he added to the new edition of 1886. But the book, whatever its excesses, remains one of the most relevant statements on tragedy ever penned. It exploded the conception of Greek culture that was prevalent down through the Victorian era, and it sounded themes developed in the twentieth century by classicists, existentialists, psychoanalysts, and others. The Case of Wagner (1888) was one Nietzsche's last books, and his wittiest. In attitude and style it is diametrically opposed to The Birth of Tragedy. Both works transcend their ostensible subjects and deal with art and culture, as well as the problems of the modern age generally. Each book in itself gives us an inadequate idea of its author; together, they furnish a striking image of Nietzsche's thought. The distinguished translations by Walter Kaufmann superbly reflect in English Nietzsche's idiom and the vitality of his style. Professor Kaufmann has also furnished running footnote commentaries, relevant passages from Nietzsche's correspondence, a bibliography, and, for the first time in any edition, an extensive index to each book.

0
|   0  reviews
Did you read The Birth of Tragedy and the Case of Wagner? Please provide your feedback and rating to help other readers.
Write Review