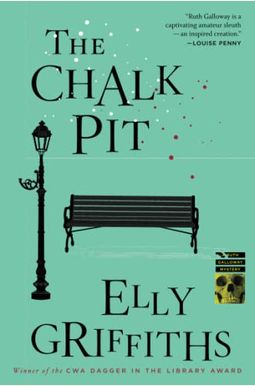 Winner of the CWA Dagger in the Library Award

Praise for Elly Griffiths' Ruth Galloway series Gripping. --Louise Penny Highly atmospheric. --New York Times Book Review
Remarkable, delightful. --Associated Press Must-reads. --Deborah Crombie
Wonderfully rich . . . A great series. --Guardian Smart, down-to-earth, and completely believable. --Mercury News Far below Norwich is a maze of old mining tunnels. When Ruth Galloway is called to examine a set of human remains in one of them, she notices the bones are almost translucent, a sign they were boiled soon after death. Once more, she's at the helm of a murder investigation. Meanwhile, DCI Nelson is looking for a homeless woman who he hears has gone underground. Could she have disappeared into the labyrinth? And if so, is she connected to the body Ruth found? As Ruth and Nelson investigate the tunnels, they hear rumors of secret societies, cannibalism, and ritual killings. And when a dead body is found with a map of what seems to be the full maze, they realize their hunt for the killer has only just begun--and that more bodies may be underfoot.

Books like The Chalk Pit The Dr Ruth Galloway Mysteries

0
|   0  reviews
Did you read The Chalk Pit The Dr Ruth Galloway Mysteries? Please provide your feedback and rating to help other readers.
Write Review