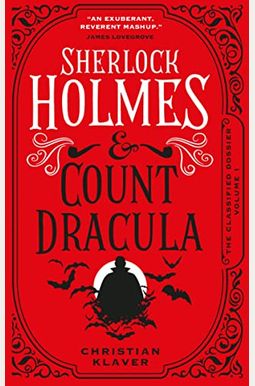 In this thrilling supernatural mystery, Sherlock Holmes and Count Dracula must join forces to banish a terrible enemy.


Sherlock Holmes is dead. His body lies in a solitary grave on the Sussex Downs, England. But Dr. Watson survives, and is now given permission to release tales in Sherlock's 'classified dossier', those cases that are, dear reader, unbelievable - for their subject matter is of the most outr and grotesque nature.

In this thrilling first instalment of The Classified Dossier, a Transylvanian nobleman called Count Dracula arrives at Baker Street seeking the help of Sherlock Holmes, for his beloved wife Mina has been kidnapped.

But Dracula is a client like no other and Sherlock and Watson must confront - despite the wild, unbelievable notion - the existence of vampires. And before long, Sherlock, Watson and their new vampire allies must work together to banish a powerful enemy growing in the shadows.

5
|   8  reviews
Did you read The Classified Dossier - Sherlock Holmes and Count Dracula? Please provide your feedback and rating to help other readers.
Write Review
1