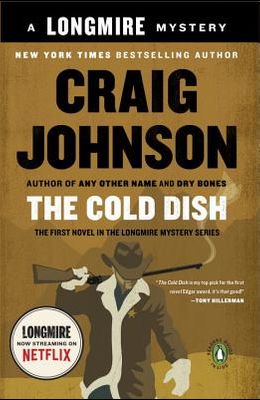 The Cold Dish: A Longmire Mystery

Introducing Wyoming's Sheriff Walt Longmire in this riveting novel from the New York Times bestselling author of Dry Bones, the first in the Longmire mystery series, the basis for the Netflix original series LONGMIRE.

Craig Johnson's new novel, The Western Star, will be available from Viking in Fall 2017.


Fans of Ace Atkins, Nevada Barr and Robert B. Parker will love this outstanding first novel, in which New York Times bestselling author Craig Johnson introduces Sheriff Walt Longmire of Wyoming's Absaroka County. Johnson draws on his deep attachment to the American West to produce a literary mystery of stunning authenticity, and full of memorable characters. After twenty-five years as sheriff of Absaroka County, Walt Longmire's hopes of finishing out his tenure in peace are dashed when Cody Pritchard is found dead near the Northern Cheyenne Reservation. Two years earlier, Cody has been one of four high school boys given suspended sentences for raping a local Cheyenne girl. Somebody, it would seem, is seeking vengeance, and Longmire might be the only thing standing between the three remaining boys and a Sharps .45-70 rifle.

With lifelong friend Henry Standing Bear, Deputy Victoria Moretti, and a cast of characters both tragic and humorous enough to fill in the vast emptiness of the high plains, Walt Longmire attempts to see that revenge, a dish best served cold, is never served at all.

Frequently Asked Questions About The Cold Dish: A Longmire Mystery

0
|   0  reviews
Did you read The Cold Dish: A Longmire Mystery? Please provide your feedback and rating to help other readers.
Write Review

List of All Editions of The Cold Dish: A Longmire Mystery