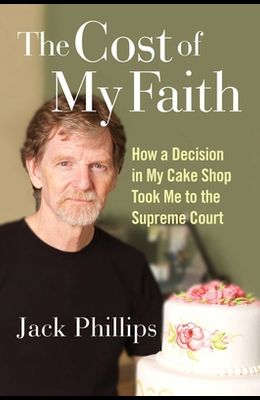 The Cost of My Faith: How a Decision in My Cake Shop Took Me to the Supreme Court

Master cake artist and a man of profound faith, Jack Phillips found himself in the middle of one of the highest-profile religious freedom cases of the century.

In July 2012, two men came to Jack Phillips's shop requesting a custom wedding cake celebrating their same-sex marriage. In a brief exchange, Jack politely declined the request, explaining that he could not design cakes for same-sex weddings but offered to design cakes for other occasions and to sell them anything else in his shop. Little did Jack know that his quiet stand for his Christian convictions about marriage would become a battle for the right of all Americans to live out their faith. Now, Jack Phillips shares his harrowing experience for the first time in this powerful new memoir. The Cost of My Faith is Jack's firsthand account from the frontlines of the battle with a culture that is making every effort to remove God from the public square and a government denying Bible-believing Christians the right to freely exercise their religious beliefs. Despite a Supreme Court victory in Masterpiece Cakeshop v. Colorado Civil Rights Commission, the fight to protect the right of Americans to freely exercise their beliefs is more critical than ever. The Cost of My Faith provides new insight into the case that shook the country and offers readers courage and inspiration to stand and live out their faith when facing their own battles.

Frequently Asked Questions About The Cost of My Faith: How a Decision in My Cake Shop Took Me to the Supreme Court

0
|   0  reviews
Did you read The Cost of My Faith: How a Decision in My Cake Shop Took Me to the Supreme Court? Please provide your feedback and rating to help other readers.
Write Review

List of All Editions of The Cost of My Faith: How a Decision in My Cake Shop Took Me to the Supreme Court