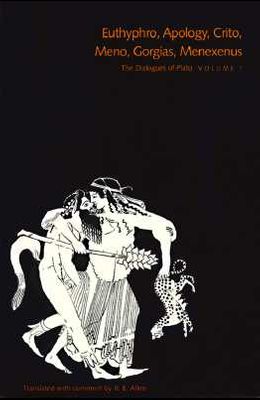 This initial volume in a series of new translations of Plato's works includes a general introduction and interpretive comments for the dialogues translated: the Euthyphro, Apology, Crito, Meno, Gorgias, and Menexenus.

Allen's work is very impressive. The translations are readable, lucid, and highly accurate. The general introduction is succinct and extremely clear. The discussion of the dating of the dialogues is enormously useful; there has previously been no brief account of these issues to which one could refer the student. Finally, the particular introductions are first rate: fine jobs of clear philosophical and historical explanation--succinct and yet sophisticated, both close to the text and philosophically incisive.--Martha Nussbaum, Brown University This is an important work that deserves our respect and attention.--Ethics This and the promised succeeding volumes will probably become the standard English version of the complete dialogues. The commentaries take advantage of the best scholarship, judge judiciously between divergent views, and often introduce new and brilliant interpretations. This is true both in the area of philosophy and in that of literary criticism.--Anthony C. Daly, S.J., Modern Schoolman Allen is a superb translator, whose elegantly simple yet precise language gives access to Plato both as a philosopher and as a literary artist.--Library Journal An important event in the world of scholarship.--London Review of Books

List of All Editions of The Dialogues of Plato, Volume 1: Euthyphro, Apology, Crito, Meno, Gorgias, Menexenus