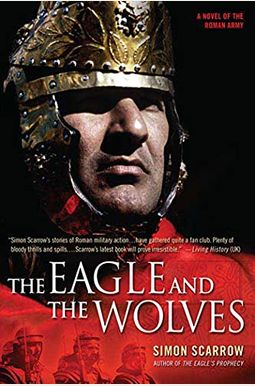 The Eagle And The Wolves: A Novel Of The Roman Army (Eagle Series)

The most dangerous mission of their military careers awaits two heroes of the Roman army in Britain.

In the epic fourth novel of Simon Scarrow's series, it's ad 44 and Vespasian and the Roman Army's Second Legion are forging ahead in their campaign to seize the southwest. Centurion Macro and newly appointed Centurion Cato are ordered by Vespasian to provide Verica, aged ruler of the Atrebates, with an army. They must train his tribal levies into a force that can protect him, enforce his rule, and take on the increasingly ambitious raids that the enemy is launching.
But open revolt is brewing. Despite the Atrebates' official allegiance to Rome, many are wary of the legions and want to resist the Roman invaders, and Macro and Cato must first win the loyalty of the disgruntled levies before tackling the enemy without. Can they succeed while surviving a deadly plot to destroy both them and their comrades serving with the eagles? In the midst of this highly volatile situation, Macro and Cato face the greatest test of their army careers. Theirs is a brazen tale of military adventure, political intrigue, and heroism, as only they stand between the destiny of Rome and bloody defeat. A relatively new master of the genre.---Booklist
Simon Scarrow's stories of Roman military action . . . have gathered quite a fan club. Plenty of bloody thrills and spills. . . . Scarrow's latest book will prove irresistible.---Living History (UK)

Frequently Asked Questions About The Eagle And The Wolves: A Novel Of The Roman Army (Eagle Series)

0
|   0  reviews
Did you read The Eagle And The Wolves: A Novel Of The Roman Army (Eagle Series)? Please provide your feedback and rating to help other readers.
Write Review

List of All Editions of The Eagle And The Wolves: A Novel Of The Roman Army (Eagle Series)