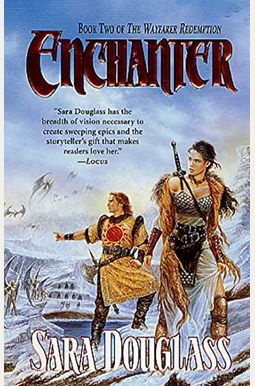 Book #2 in the The Wayfarer Redemption Series
by
Sara Douglass
$3.88
Select Format

The stunning sequel to The Wayfarer Redemption

Axis is a true hero, in every sense of the word. On his shoulders lies the double burden of prophecy and war. Having fulfilled the first part of the prophecy by becoming the StarMan, he now must reunite the three races inhabiting his world.

It is his destiny to lead an army against his evil half-brother, to regain control of Tencendor, once the greatest land in the world.

It is his destiny to be caught between the two women he loves, one the epitome of gentility, beauty, and intelligence, the other a fierce warrior with a cunning wit.

And it is his destiny to be thwarted at every turn by the vicious Goragel, an insane monster bent on destroying all that Axis works to preserve . . .

Enchanter is the riveting sequel to Sara Douglass's spell-binding first novel The Wayfarer Redemption, and winner of the 1996 Aurealis Award for Best Fantasy Novel. Sara Douglass has taken America by storm with this powerful tale of love, prophecy, battles, and revenge.

The Wayfarer Redemption Series In Order - By Sara Douglass

0
|   0  reviews
Did you read Enchanter? Please provide your feedback and rating to help other readers.
Write Review