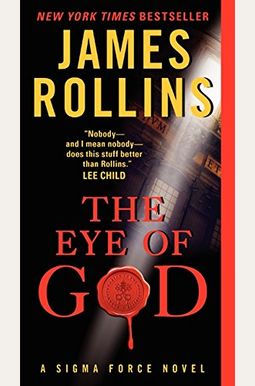 The Eye Of God (Sigma Force)

An apocalyptic vision of the day after tomorrow, of a future predicted by the distant past, of a world doomed to burn . . .

The crash of a U.S. military research satellite triggers a search for the valuable cargo it holds: a code-black physics project connected to the study of dark energy, the energy associated with the birth of our universe. But the last blurry image from the falling satellite captures a chilling sight: a frightening look at the future, a view of a smoldering eastern seaboard of the United States in utter ruin.

At the Vatican, a mysterious package arrives containing two strange artifacts: a skull scrawled with ancient Aramaic and a tome bound in human skin. DNA testing reveals both are from Genghis Khan--the Mongol king whose undiscovered tomb is rumored to hold the vast treasures and knowledge of a lost ancient empire.

Commander Gray Pierce, and Sigma--joined by a pair of Vatican historians--race to uncover a truth tied to the fall of the Roman Empire, to a mystery bound in the roots of Christianity's origins, and to a weapon hidden for centuries that holds the fate of humanity.

--Associated Press on Bloodline on THE EYE OF GOD

Frequently Asked Questions About The Eye Of God (Sigma Force)

0
|   0  reviews
Did you read The Eye Of God (Sigma Force)? Please provide your feedback and rating to help other readers.
Write Review

List of All Editions of The Eye Of God (Sigma Force)