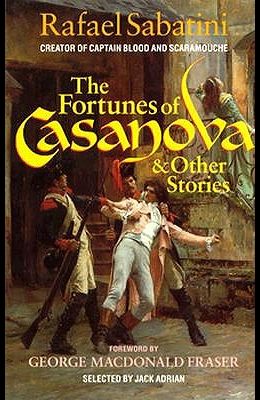 The Fortunes of Casanova and Other Stories

Rafael Sabatini was one of the greatest writers of historical adventure fiction who ever lived. The master of the swashbuckling tale, he penned such runaway bestsellers as Scaramouche and Captain Blood. Indeed, Scaramouche was made into one of the most successful adventure films of that era, surpassed only by another Sabatini novel, The Sea Hawk, which sold over a million copies and led to a celebrated film starring Errol Flynn.
Sabatini was also a prolific author of short stories, and this volume contains 20 of his best. Full of pace, incident, and plot, these tales range in time from the 16th to the 18th centuries, and they conjure up a wonderful cast of rogues, vagabonds, shyster lawyers, cutpurses, quacks, and conmen. The heart of the book is a series of stories featuring Casanova, the libertine, swordsman, and wit. Sabatini takes nine colorful exploits from Casanova's notorious Memoirs and retells them with his characteristic gusto. And in addition to the stories, Jack Adrian provides an informative introduction that outlines Sabatini's life and offers an enlightening discussion of the genre of historical fiction.
No writer, not Scott nor Dumas nor Stevenson, has brought the past to life more vividly, observes George MacDonald Fraser in the foreword. Whether set in Italy during the Renaissance or France during the Terror, these tales do indeed bring the past to glorious life, paying meticulous attention to historical detail even as they abound in surprising turns, witty dialogue, and breathtaking adventure.

Frequently Asked Questions About The Fortunes of Casanova and Other Stories

0
|   0  reviews
Did you read The Fortunes of Casanova and Other Stories? Please provide your feedback and rating to help other readers.
Write Review