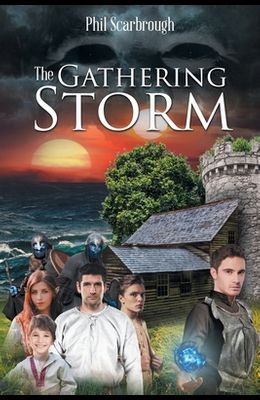 The Gathering Storm poses the question, what would you do if it were shown that your perfectly normal ten-year-old child was not so perfectly normal. In fact, he was perhaps the most important person ever born, and as a result, you would have to fight an ancient enemy that is malevolent and overwhelmingly powerful. This is the medieval world of Aden Braylon, who--along with his Elf mother Valeria, Human father Kael, and brother Devlyn for protection and insight, and ageless Mage Aaron for the key to future/past--must find a way to not only survive that enemy but also lead the fight back.

The Gathering Storm is the first book of a sci-fi/fantasy trilogy, A Tale of Future Past. It is told in the style of Sir Thomas Malory and JR Tolkien with a little David Eddings thrown in for humor. It begins:

Daddy, Daddy, wake up, Aden whispered. Standing by Kael and Valeria's bed he shook Kael's arm. Wake up, Dad, there're monsters coming outside
What? Kael's brain was still a little addled from sleep.
Wake up He shook his arm again. I'm scared, Dad. There are monsters, big blue monsters, and they'll be here in a little bit

A story line that can be read purely for enjoyment but also it encourages the reader to imagine and think. All this with an ending that poses the questions, who are we, and why do we really exist.

0
|   0  reviews
Did you read The Gathering Storm? Please provide your feedback and rating to help other readers.
Write Review