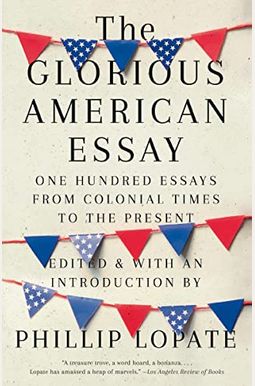 The Glorious American Essay: One Hundred Essays From Colonial Times To The Present

Not only an education but a joy. This is a book for the ages. --Rivka Galchen, author of Atmospheric Disturbances The essay form is an especially democratic one, and many of the essays Phillip Lopate has gathered here address themselves--sometimes critically--to American values. We see the Puritans, the Founding Fathers and Mothers, and the stars of the American Renaissance struggle to establish a national culture. A grand tradition of nature writing runs from Audubon, Thoreau, and John Muir to Rachel Carson and Annie Dillard. Marginalized groups use the essay to assert or to complicate notions of identity. Lopate has cast his net wide, embracing critical, personal, political, philosophical, literary, polemical, autobiographical, and humorous essays. Americans by birth as well as immigrants appear here, famous essayists alongside writers more celebrated for fiction or poetry. The result is a dazzling overview of the riches of the American essay.

Frequently Asked Questions About The Glorious American Essay: One Hundred Essays From Colonial Times To The Present

0
|   0  reviews
Did you read The Glorious American Essay: One Hundred Essays From Colonial Times To The Present? Please provide your feedback and rating to help other readers.
Write Review

List of All Editions of The Glorious American Essay: One Hundred Essays From Colonial Times To The Present