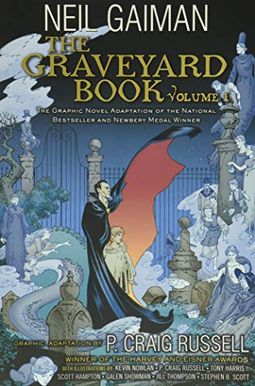 It Takes a Graveyard to Raise A Child.

Nobody Owens, known as Bod, is a normal boy.

He would be completely normal if he didn't live in a graveyard, wasn't being raised by ghosts, and didn't have a guardian who belongs to neither the world of the living nor the dead.

There are adventures in the graveyard for a boy an ancient Indigo Man, a gateway to the abandoned city of ghouls, the strange and terrible Sleer. But if Bod leaves the graveyard, he will be in danger from the man Jack who has already killed Bod's family.

Each chapter in this adaptation by P. Craig Russell is illustrated by a different luminary from the comic book world, showcasing a variety of styles from a breadth of talent. Together, they bring Neil Gaiman's award-winning, nationally bestselling children's novel The Graveyard Book to new life in this gorgeously illustrated two-volume graphic novel adaptation.

Volume One contains Chapter One through the Interlude, while Volume Two includes Chapter Six through the end.

The Graveyard Book Series In Order - By Gaiman Neil

0
|   0  reviews
Did you read The Graveyard Book Graphic Novel: Volume 1? Please provide your feedback and rating to help other readers.
Write Review

List of All Editions of The Graveyard Book Graphic Novel: Volume 1