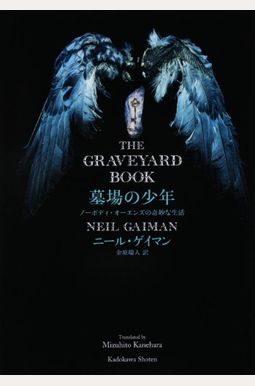 Book #1-2 in the The Graveyard Book Series
by
Neil Gaiman
$0.00
Select Format

A commemorative edition of a perennial favorite--The Graveyard Book by Neil Gaiman, which has sold over one million copies and is the only novel to win both the Newbery Medal and the Carnegie Medal. Special content in this edition includes the story behind The Graveyard Book from Neil Gaiman and sketches by Dave McKean. This middle grade novel is an excellent choice for tween readers in grades 5 to 6, especially during homeschooling. It's a fun way to keep your child entertained and engaged while not in the classroom.

Nobody Owens, known as Bod, is a normal boy. He would be completely normal if he didn't live in a graveyard, being raised by ghosts, with a guardian who belongs to neither the world of the living nor the dead. There are adventures in the graveyard for a boy--an ancient Indigo Man, a gateway to the abandoned city of ghouls, the strange and terrible Sleer. But if Bod leaves the graveyard, he will be in danger from the man Jack--who has already killed Bod's family.

The Graveyard Book is the winner of the Newbery Medal, the Carnegie Medal, the Hugo Award for Best Novel, the Locus Award for Young Adult Book, the American Bookseller Association's Best Indie Young Adult Buzz Book, a Horn Book Honor, and Audio Book of the Year.

The Graveyard Book Series In Order - By Neil Gaiman

0
|   0  reviews
Did you read The Graveyard Book? Please provide your feedback and rating to help other readers.
Write Review