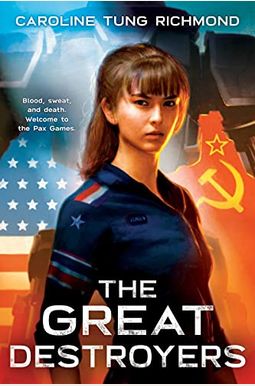 Welcome to the Pax Games.

Jo Linden was born into a world where wars are won with giant mechanical soldiers and the nuclear bomb was never invented. Yet the Cold War still rages, and international rivalries between democracy and communism are now fought at the Pax Games, an Olympic-style competition that pits young pilots of mechas against each other. The USR has beaten the US in nearly every game since its inception, and in the 1963 Games, the US is desperate for a win. Because it's more than just the Games at stake. Premier Khrushchev will be attending, and after, he and President Kennedy are slated to sign a peace accord stabilizing the war in Vietnam-and their volatile relationship.

Raised in her father's mecha repair shop, Jo knows more than anyone about piloting. She's also the most unlikely pick for Team USA since she's a virtually unknown fighter. So when she's invited at the last minute to compete, she jumps at it. This could be the only chance to save her family's home from debt collectors. All eyes are on Jo from the moment she arrives. But as fighters start dying in the arena, it's suddenly clear that it's more than the usual Pax Games, and Jo finds herself drawn into a deadly political plot. And if she can't figure out the truth, it might mean the annihilation of everything.

In a global arms race between superpowers, playing out in violent games that only humanity could create, comes a chilling story of clashing titans, ruthless competition, freedom, and the girl caught in the middle of it all.

0
|   0  reviews
Did you read The Great Destroyers? Please provide your feedback and rating to help other readers.
Write Review