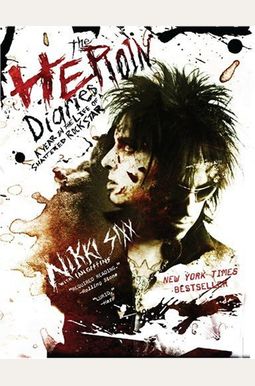 The Heroin Diaries: A Year In The Life Of A Shattered Rock Star

In honor of the ten-year anniversary of The Heroin Diaries, Nikki Sixx's definitive and bestselling memoir on drug addiction is reissued with exclusive new content. This shocking, gripping, and at times darkly hilarious memoir explores Nikki's yearlong war with a vicious heroin addiction. Now more than ever, with opioid addiction ravaging our country and rising by twenty percent in the past year alone, Nikki's story of both his descent into drug-addled decay and subsequent recovery and transition into a rehabilitation advocate are now more relevant than ever.

When Motley Crue was at the height of its fame, there wasn't any drug Nikki Sixx wouldn't do. He spent days--sometimes alone, sometimes with other addicts, friends, and lovers--in a coke- and heroin-fueled daze. The highs were high, and Nikki's journal entries reveal some euphoria and joy. But the lows were lower, often ending with Nikki in his closet, surrounded by drug paraphernalia and wrapped in paranoid delusions. Here, Nikki shares the diary entries--some poetic, some scatterbrained, some bizarre--of those dark times. Joining him are Tommy Lee, Vince Neil, Mick Mars, Slash, Rick Nielsen, Bob Rock, and a host of ex-managers, ex-lovers, and more. Brutally honest, utterly riveting, and surprisingly moving, The Heroin Diaries follows Nikki during the year he plunged to rock bottom--and his courageous decision to pick himself up and start living again.

Frequently Asked Questions About The Heroin Diaries: A Year In The Life Of A Shattered Rock Star

0
|   0  reviews
Did you read The Heroin Diaries: A Year In The Life Of A Shattered Rock Star? Please provide your feedback and rating to help other readers.
Write Review

List of All Editions of The Heroin Diaries: A Year In The Life Of A Shattered Rock Star