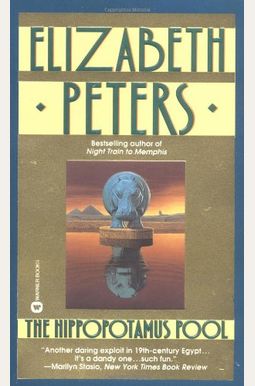 What could be more intriguing to Amelia Peabody and her irresistible, irascible husband, Emerson (the Father of Curses), than meeting a masked stranger who offers to show them an Egyptian queen's lost tomb? The mysterious disappearance of that midnight visitor before he can disclose the secret! Thus begins Amelia's newest adventure along the Nile. Helped, or hampered, by two teenagers, their son, Ramses, and their beautiful ward, Nefret, the Emersons set sail for Thebes to find the hidden tomb of Queen Tetisheri. With them is a timid (or is she?) governess named Miss Marmaduke. Soon to join the expedition are Amelia's sister- and brother-in-law, Evelyn and Walter, whose marriage is going through a rocky patch. As usual, archaeology is only one of Amelia's concerns, as the Emersons encounter murderers, kidnappers, grave robbers and ancient Egyptian curses. The tomb, of course, will hold a stunning surprise. And the Hippopotamus Pool? It's an ancient Egyptian story of war and wits that Amelia is translating. and that alerts her to a hippo of a different stripe: a nefarious, overweight art dealer who may become her next archenemy. Or perhaps not - for another nemesis is lurking under the Saharan sun, a master of disguises, a caliph of crime, a veritable vizier of villainy. Will Amelia meet her match?

0
|   0  reviews
Did you read The Hippopotamus Pool? Please provide your feedback and rating to help other readers.
Write Review