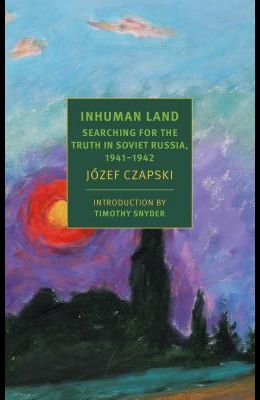 A classic work of reportage about the Katyń Massacre during World War I by a soldier who narrowly escaped the atrocity himself.

In 1941, when Germany turned against the USR, tens of thousands of Poles--men, women, and children who were starving, sickly, and impoverished--were released from Soviet prison camps and allowed to join the Polish Army being formed in the south of Russia. One of the survivors who made the difficult winter journey was the painter and reserve officer J zef Czapski. General Anders, the army's commander in chief, assigned Czapski the task of receiving the Poles arriving for military training; gathering accounts of what their fates had been; organizing education, culture, and news for the soldiers; and, most important, investigating the disappearance of thousands of missing Polish officers.
Blocked at every level by the Soviet authorities, Czapski was unaware that in April 1940 many officers had been shot dead in Katyn forest, a crime for which Soviet Russia never accepted responsibility.
Czapski's account of the years following his release from the camp and the formation of the Polish Army, and its arduous trek through Central Asia and the Middle East to fight on the Italian front offers a stark depiction of Stalin's Russia at war and of the suffering, stoicism, and bravery of his fellow Poles. A work of clear observation and deep compassion, Inhuman Land is one of the twentieth century's indispensable acts of literary witness.

Frequently Asked Questions About Inhuman Land: Searching for the Truth in Soviet Russia, 1941-1942

0
|   0  reviews
Did you read Inhuman Land: Searching for the Truth in Soviet Russia, 1941-1942? Please provide your feedback and rating to help other readers.
Write Review

List of All Editions of Inhuman Land: Searching for the Truth in Soviet Russia, 1941-1942