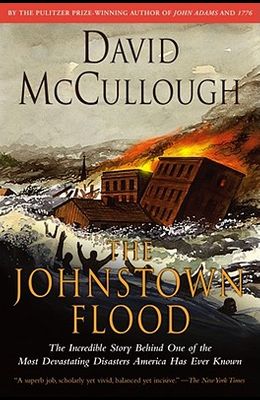 The stunning story of one of America's great disasters, a preventable tragedy of Gilded Age America, brilliantly told by master historian David McCullough.

At the end of the nineteenth century, Johnstown, Pennsylvania, was a booming coal-and-steel town filled with hardworking families striving for a piece of the nation's burgeoning industrial prosperity. In the mountains above Johnstown, an old earth dam had been hastily rebuilt to create a lake for an exclusive summer resort patronized by the tycoons of that same industrial prosperity, among them Andrew Carnegie, Henry Clay Frick, and Andrew Mellon. Despite repeated warnings of possible danger, nothing was done about the dam. Then came May 31, 1889, when the dam burst, sending a wall of water thundering down the mountain, smashing through Johnstown, and killing more than 2,000 people. It was a tragedy that became a national scandal. Graced by David McCullough's remarkable gift for writing richly textured, sympathetic social history, The Johnstown Flood is an absorbing, classic portrait of life in nineteenth-century America, of overweening confidence, of energy, and of tragedy. It also offers a powerful historical lesson for our century and all times: the danger of assuming that because people are in positions of responsibility they are necessarily behaving responsibly.

0
|   0  reviews
Did you read The Johnstown Flood? Please provide your feedback and rating to help other readers.
Write Review