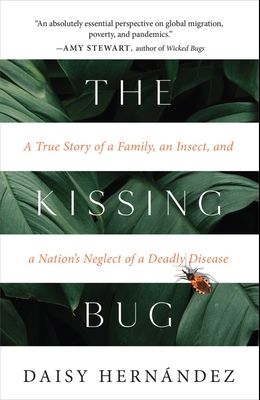 The Kissing Bug: A True Story of a Family, an Insect, and a Nation's Neglect of a Deadly Disease

Growing up in a New Jersey factory town in the 1980s, Daisy Hern ndez believed that her aunt had become deathly ill from eating an apple. No one in her family, in either the United States or Colombia, spoke of infectious diseases. Even into her thirties, she only knew that her aunt had died of Chagas, a rare and devastating illness that affects the heart and digestive system. But as Hern ndez dug deeper, she discovered that Chagas--or the kissing bug disease--is more prevalent in the United States than the Zika virus.

After her aunt's death, Hern ndez began searching for answers. Crisscrossing the country, she interviewed patients, doctors, epidemiologists, and even veterinarians with the Department of Defense. She learned that in the United States more than three hundred thousand people in the Latinx community have Chagas, and that outside of Latin America, this is the only country with the native insects--the kissing bugs--that carry the Chagas parasite.

Through unsparing, gripping, and humane portraits, Hern ndez chronicles a story vast in scope and urgent in its implications, exposing how poverty, racism, and public policies have conspired to keep this disease hidden. A riveting and nuanced investigation into racial politics and for-profit healthcare in the United States, The Kissing Bug reveals the intimate history of a marginalized disease and connects us to the lives at the center of it all.

Frequently Asked Questions About The Kissing Bug: A True Story of a Family, an Insect, and a Nation's Neglect of a Deadly Disease

0
|   0  reviews
Did you read The Kissing Bug: A True Story of a Family, an Insect, and a Nation's Neglect of a Deadly Disease? Please provide your feedback and rating to help other readers.
Write Review

List of All Editions of The Kissing Bug: A True Story of a Family, an Insect, and a Nation's Neglect of a Deadly Disease