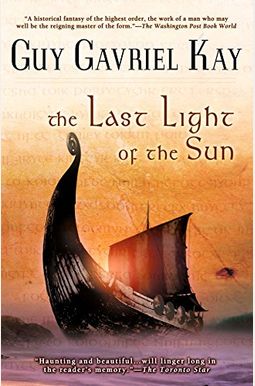 The Last Light Of The Sun

A powerful, moving saga evoking the Celtic, Anglo-Saxon and Norse cultures of a thousand years ago from the acclaimed author of The Fionavar Tapestry.

A historical fantasy of the highest order, the work of a man who may well be the reigning master of the form.--The Washington Post Book World Bern Thorkellson, punished for his father's sins, denied his heritage and home, commits an act of vengeance and desperation that brings him face-to-face with a past he's been trying to leave behind. In the Anglcyn lands of King Aeldred, the shrewd king, battling inner demons all the while, shores up his defenses with alliances and diplomacy--and with swords and arrows. Meanwhile his exceptional, unpredictable sons and daughters give shape to their own desires when battle comes and darkness falls in the spirit wood. And in the valleys and shrouded hills of the Cyngael, whose voices carry music even as they feud and raid amongst each other, violence and love become deeply interwoven when the dragon ships come and Alun ab Owyn, pursuing an enemy in the night, glimpses strange lights gleaming above forest pools. Making brilliant use of motifs from saga and song and chronicle, Guy Gavriel Kay conjures a work of subtle, intricate richness, bringing to life an unforgettable world balanced on the knife-edge of change.

Frequently Asked Questions About The Last Light Of The Sun

0
|   0  reviews
Did you read The Last Light Of The Sun? Please provide your feedback and rating to help other readers.
Write Review

List of All Editions of The Last Light Of The Sun