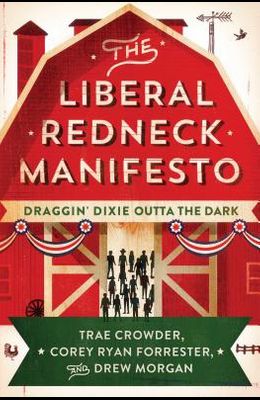 The Liberal Rednecks--a Southern-based stand-up comedy group known for their scathing political satire--celebrate all that's good about Dixie while leading a progressive revolution toward a New South.

The American South is home to some of the best music, cuisine, athletics, whiskey, and weather the country has to offer, but its reputation as a haven for its right-wing, Bible-beatin', assault-rifle-totin' citizens precedes it--and, according to the Liberal Rednecks, rightfully so. Yet, as they explain it, the situation in the South is far more complex than hypocritical, nose-up-in-the-air Yankees give it credit for. And they should know--they are native sons. Whip-smart, hilarious, and incisive, the Liberal Rednecks are lifelong, down-home Southern boys who aren't afraid to call out the outdated traditions and intolerant attitudes of their native land--while also shining a proud light on the most misunderstood region of the country. Their mission: to provide a manifesto for young progressives south of the Mason-Dixon line to rise up and claim their homeland--without abandoning the best of their culture. Exploring race, class, guns, religion, drug addiction, alcoholism, and homophobia, the Liberal Rednecks tell it like it is while challenging stereotypes at every turn. Fresh, funny, and surprising, The Liberal Redneck Manifesto gives us a vision of Dixieland as it exists now--and what it could become.

0
|   0  reviews
Did you read The Liberal Redneck Manifesto: Draggin' Dixie Outta the Dark? Please provide your feedback and rating to help other readers.
Write Review

List of All Editions of The Liberal Redneck Manifesto: Draggin' Dixie Outta the Dark