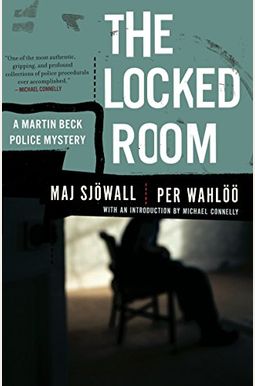 Book #8 in the Martin Beck Police Mystery Series
by
Sjowall Maj and Per Wahloo and Connelly Michael
$5.00
Select Format

Steven Mackintosh stars as dogged, dyspeptic detective Martin Beck, with Neil Pearson as his friend and colleague Lennart Kollberg, in this BC Radio 4 dramatization of The Locked Room.

The Martin Beck books are widely acknowledged as some of the most influential detective novels ever written. Coauthored by Swedish husband and wife team Maj Sjowall and Per Wahloo between 1965 and 1975, the ten-book series set a gold standard for all subsequent Scandinavian crime fiction.

Long before Kurt Wallander or Harry Hole, Beck was the original flawed policeman, working with a motley collection of colleagues to uncover the cruelty and injustice lurking beneath the surface of Sweden s seemingly liberal, democratic society.

In The Locked Room, adapted from the eighth book in the series, Martin Beck has just returned to work after recuperating from being shot in the chest. His first case is a conundrum: the body of a man who has been shot dead is discovered in a sealed room, but there is no gun. While he tries to figure that case out, Kollberg and Larsson are on the trail of a pair of bank robbers.

0
|   0  reviews
Did you read The Locked Room? Please provide your feedback and rating to help other readers.
Write Review