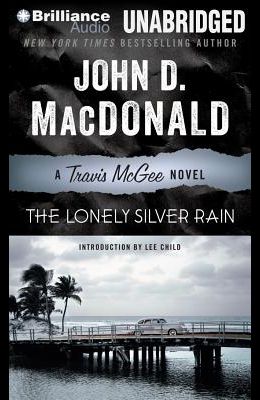 From a beloved master of crime fiction, The Lonely Silver Rain is one of many classic novels featuring Travis McGee, the hard-boiled detective who lives on a houseboat.

Travis McGee has luck to thank for his reputation as a first-rate salvager of stolen boats. Now Billy Ingraham, a self-made tycoon, is betting that McGee can locate his $700,000 custom cruiser. McGee isn't so sure. He knows all too well the dangerous link between Florida boatjackings and the drug trade, and he's vowed never to swim with the sharks--but if he wants to keep his head (AKA finances) above water, swim he will.

As a young writer, all I ever wanted was to touch readers as powerfully as John D. MacDonald touched me.--Dean Koontz

Even though McGee doesn't feel like sticking out his neck for this case, Billy's wife, Millis, convinces him to step up to the challenge. Sort of. After a pilot friend leads him to the stolen vessel, McGee immediately regrets not going with his gut. The yacht is no longer an ordinary boat. It's a slaughterhouse. After witnessing the sordid scene, McGee realizes he's knee-deep in the white-hot center of an international cocaine ring. In the midst of this terrifying ordeal and an affair with a very dangerous woman, McGee is shocked by the return of a secret from his past. Over the years, McGee has recovered many wrecks--now he'll need to salvage his own life. Features a new Introduction by Lee Child

0
|   0  reviews
Did you read The Lonely Silver Rain? Please provide your feedback and rating to help other readers.
Write Review

List of All Editions of The Lonely Silver Rain