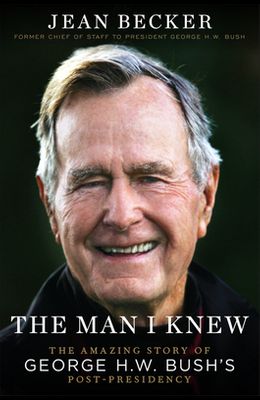 The Man I Knew: The Amazing Story of George H. W. Bush's Post-Presidency

A heartfelt portrait of President George H. W. Bush and his post-presidential life by a confidante who knew him well

As chief of staff, Jean Becker had a ringside seat to the never-boring story of George Herbert Walker Bush's life post-presidency, including being at his side when he died and subsequently facing the challenge--and great honor--of being in charge of his state funeral. Full of heart and wisdom, The Man I Knew is a vibrant behind-the-scenes look into the ups and downs of heading up the office of a former president by one of the people who knew him best.

This book tells the story of how, after his devastating loss to Bill Clinton in 1992, President George H. W. Bush rebuilt his life, found a way to make a difference, and how, by the time he died in November 2018, was revered by his country and the world. Bush's post-presidency journey was filled with determination, courage, love, hope, humor, fun, and big ideas. He became best friends with the man who defeated him, developed the odd habit of jumping out of airplanes, and learned how to adjust to life in a wheelchair, after having lived most of his life as a high-energy athlete. He joyously saw two sons become governors of their states, one of whom would go one to become president of the United States.

What happens when you go almost overnight from being the most important and powerful person in the world to a private citizen? The Man I Knew tells just such a story, of one man's humble journey from president to man of the people.

0
|   0  reviews
Did you read The Man I Knew: The Amazing Story of George H. W. Bush's Post-Presidency? Please provide your feedback and rating to help other readers.
Write Review

List of All Editions of The Man I Knew: The Amazing Story of George H. W. Bush's Post-Presidency