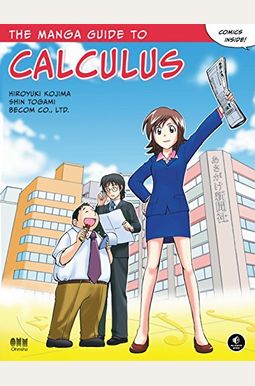 The Manga Guide To Calculus

Noriko is just getting started as a junior reporter for the Asagake Times. She wants to cover the hard-hitting issues, like world affairs and politics, but does she have the smarts for it? Thankfully, her overbearing and math-minded boss, Mr. Seki, is here to teach her how to analyze her stories with a mathematical eye.

In The Manga Guide to Calculus, you'll follow along with Noriko as she learns that calculus is more than just a class designed to weed out would-be science majors. You'll see that calculus is a useful way to understand the patterns in physics, economics, and the world around us, with help from real-world examples like probability, supply and demand curves, the economics of pollution, and the density of Shochu (a Japanese liquor). Mr. Seki teaches Noriko how to:
-Use differentiation to understand a function's rate of change
-Apply the fundamental theorem of calculus, and grasp the relationship between a function's derivative and its integral
-Integrate and differentiate trigonometric and other complicated functions
-Use multivariate calculus and partial differentiation to deal with tricky functions
-Use Taylor Expansions to accurately imitate difficult functions with polynomials Whether you're struggling through a calculus course for the first time or you just need a painless refresher, you'll find what you're looking for in The Manga Guide to Calculus. This EduManga book is a translation from a bestselling series in Japan, co-published with Ohmsha, Ltd. of Tokyo, Japan.

Frequently Asked Questions About The Manga Guide To Calculus

0
|   0  reviews
Did you read The Manga Guide To Calculus? Please provide your feedback and rating to help other readers.
Write Review

List of All Editions of The Manga Guide To Calculus