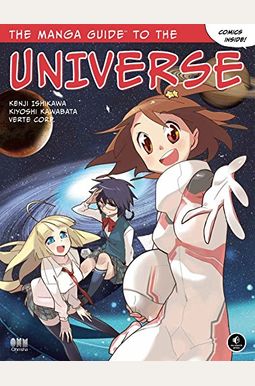 The Manga Guide To The Universe

Join Kanna, Kanta, Yamane, and Gloria in The Manga Guide to the Universe as they explore our solar system, the Milky Way, and faraway galaxies in search of the universe's greatest mysteries: dark matter, cosmic expansion, and the Big Bang itself.

As you rocket across the night sky, you'll become acquainted with modern astronomy and astrophysics, as well as the classical discoveries and theories on which they're built. You'll even learn why some scientists believe finding extraterrestrial life is inevitable You'll also learn about:
-Discoveries made by Copernicus, Galileo, Kepler, Hubble, and other seminal astronomers
-Theories of the universe's origins, evolution, and geometry
-The ways you can measure and observe heavenly bodies with different telescopes, and how astronomers calculate distances in space
-Stellar classifications and how the temperature, size, and magnitude of a star are related
-Cosmic background radiation, what the WMAP satellite discovered, and scientists' predictions for the future of the universe So dust off your flight suit and take a fantastic voyage through the cosmos in The Manga Guide to the Universe.

Frequently Asked Questions About The Manga Guide To The Universe

0
|   0  reviews
Did you read The Manga Guide To The Universe? Please provide your feedback and rating to help other readers.
Write Review

List of All Editions of The Manga Guide To The Universe