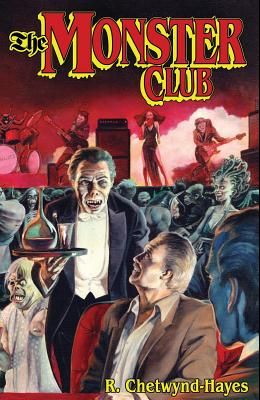 Hidden beneath the streets of London is a dark and dreadful establishment known as The Monster Club, where vampires indulge in a rather different kind of Bloody Mary and ghouls tear into their gruesome repasts. Here, along with the usual monsters - vampires, werewolves, ghouls, and some of Dr Frankenstein's more freakish creations - you'll find other, less familiar ones. You'll meet the frightening Fly-by-Night, the hideous shaddy, the horrible mock, and the dreaded shadmock, perhaps the most terrible of all.

When Donald McCloud offers a starving man a meal, he unexpectedly discovers that the man is a vampire - and he's the main course Accompanying the vampire, Eramus, to The Monster Club, Donald encounters a whole host of strange monsters, who, in a series of five linked stories, recount to Donald their monstrous exploits. But as Donald is regaled with these tales of monsters and their unfortunate human victims, it gradually dawns on him that as the only human in a club full of bloodthirsty monsters, he might be in a bit of a predicament. . . . First published as a paperback original in 1976, R. Chetwynd-Hayes's The Monster Club was adapted for a 1981 film starring Vincent Price, John Carradine and Donald Pleasence, and both book and film have gone on to become cult classics. Told in a wry, tongue-in-cheek style, the tales in The Monster Club are simultaneously horrific, comical, and curiously moving. This edition is the first in more than twenty years and features a new introduction by Stephen Jones and a reproduction of John Bolton's painting from the comic book adaptation of the film.

0
|   0  reviews
Did you read The Monster Club? Please provide your feedback and rating to help other readers.
Write Review