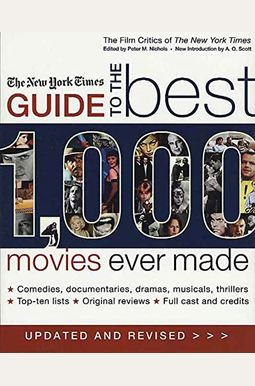 From the first talkies to modern blockbusters, The New York Times Guide to the Best 1,000 Movies Ever Made collects the original reviews of the most popular and influential films exactly as they appeared in print, creating a fascinating history of nearly a century of cinema.

Written by such acclaimed critics as Vincent Canby, Janet Maslin, Elvis Mitchell, and others, the film reviews featured in this indispensable volume cover black and white classics, Technicolor musicals, widescreen extravaganzas, genre favorites, art films, and foreign masterpieces with honest and thought-provoking assessments that reflect the eras in which they were initially released.

With critiques of beloved European and Asian films by directors such as Truffaut, Fellini, Almodovar, and Kurosawa appearing beside Hollywood milestones from Kubrick, Spielberg, Hitchcock, and Welles, this book traces the careers of these groundbreaking filmmakers, and encapsulates the evolution of the medium and film criticism--making this an invaluable resource for any movie fan.

Special Features and Extras Include: