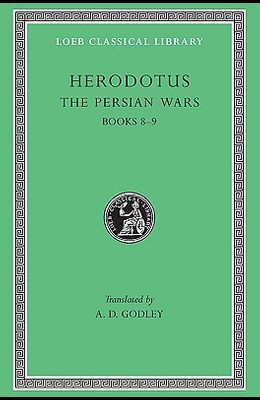 by
Herodotus and A D Godley
$8.76
Select Format

Herodotus the great Greek historian was born about 484 BCE, at Halicarnassus in Caria, Asia Minor, when it was subject to the Persians. He travelled widely in most of Asia Minor, Egypt (as far as Assuan), North Africa, Syria, the country north of the Black Sea, and many parts of the Aegean Sea and the mainland of Greece. He lived, it seems, for some time in Athens, and in 443 went with other colonists to the new city Thurii (in South Italy), where he died about 430. He was 'the prose correlative of the bard, a narrator of the deeds of real men, and a describer of foreign places' (Murray).

Herodotus's famous history of warfare between the Greeks and the Persians has an epic dignity which enhances his delightful style. It includes the rise of the Persian power and an account of the Persian empire; a description and history of Egypt; and a long digression on the geography and customs of Scythia. Even in the later books on the attacks of the Persians against Greece there are digressions. All is most entertaining and produces a grand unity. After personal inquiry and study of hearsay and other evidence, Herodotus gives us a not uncritical estimate of the best that he could find. The Loeb Classical Library edition of Herodotus is in four volumes.

0
|   0  reviews
Did you read The Persian Wars? Please provide your feedback and rating to help other readers.
Write Review