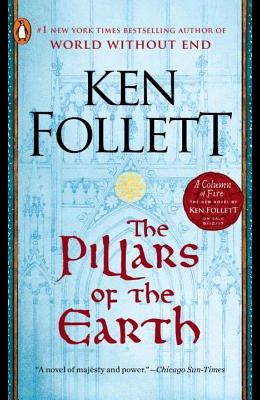 The Pillars of the Earth

Book #1 in the Kingsbridge Series
by
Ken Follett
$3.88
Select Format

#1 New York Times Bestseller Oprah's Book Club Selection From the #1 New York Times bestselling author of A Column of Fire, the monumental masterpiece (Booklist) that changed the course of Ken Follett's already phenomenal career. Nominated as one of America's best-loved novels by PBS's The Great American Read Follett is a master, extolled the Washington Post on the release of The Pillars of the Earth. A departure for the bestselling thriller writer, the historical epic stunned readers and critics alike with its ambitious scope and gripping humanity. Today, it stands as a testament to Follett's unassailable command of the written word and to his universal appeal. The Pillars of the Earth tells the story of Philip, prior of Kingsbridge, a devout and resourceful monk driven to build the greatest Gothic cathedral the world has known . . . of Tom, the mason who becomes his architect--a man divided in his soul . . . of the beautiful, elusive Lady Aliena, haunted by a secret shame . . . and of a struggle between good and evil that will turn church against state and brother against brother. A spellbinding epic tale of ambition, anarchy, and absolute power set against the sprawling medieval canvas of twelfth-century England, this is Ken Follett's historical masterpiece.

Frequently Asked Questions About The Pillars of the Earth

0
|   0  reviews
Did you read The Pillars of the Earth? Please provide your feedback and rating to help other readers.
Write Review

List of All Editions of The Pillars of the Earth