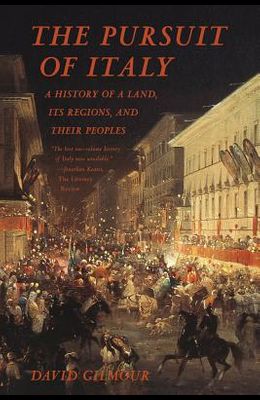 The Pursuit of Italy: A History of a Land, Its Regions, and Their Peoples

A provocative, entertaining account of Italy's diverse riches, its hopes and dreams, its past and present

Did Garibaldi do Italy a disservice when he helped its disparate parts achieve unity? Was the goal of political unification a mistake? The question is asked and answered in a number of ways in The Pursuit of Italy, an engaging, original consideration of the many histories that contribute to the brilliance--and weakness--of Italy today.

David Gilmour's wonderfully readable exploration of Italian life over the centuries is filled with provocative anecdotes as well as personal observations, and is peopled by the great figures of the Italian past--from Cicero and Virgil to the controversial politicians of the twentieth century. His wise account of the Risorgimento debunks the nationalistic myths that surround it, though he paints a sympathetic portrait of Giuseppe Verdi, a beloved hero of the era.

Gilmour shows that the glory of Italy has always lain in its regions, with their distinctive art, civic cultures, identities, and cuisines. Italy's inhabitants identified themselves not as Italians but as Tuscans and Venetians, Sicilians and Lombards, Neapolitans and Genoese. Italy's strength and culture still come from its regions rather than from its misconceived, mishandled notion of a unified nation.

Frequently Asked Questions About The Pursuit of Italy: A History of a Land, Its Regions, and Their Peoples

0
|   0  reviews
Did you read The Pursuit of Italy: A History of a Land, Its Regions, and Their Peoples? Please provide your feedback and rating to help other readers.
Write Review

List of All Editions of The Pursuit of Italy: A History of a Land, Its Regions, and Their Peoples