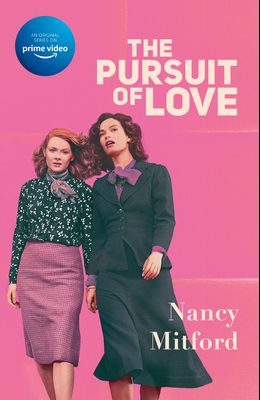 The Pursuit of Love (Television Tie-In)

Mitford's most enduringly popular novel, The Pursuit of Love is a classic comedy about growing up and falling in love among the privileged and eccentric. Soon to be an original series on Prime Video.

Mitford modeled her characters on her own famously unconventional family. We are introduced to the Radletts through the eyes of their cousin Fanny, who stays with them at Alconleigh, their Gloucestershire estate. Uncle Matthew is the blustering patriarch, known to hunt his children when foxes are scarce; Aunt Sadie is the vague but doting mother; and the seven Radlett children, despite the delights of their unusual childhood, are recklessly eager to grow up. The first of three novels featuring these characters, The Pursuit of Love follows the travails of Linda, the most beautiful and wayward Radlett daughter, who falls first for a stuffy Tory politician, then an ardent Communist, and finally a French duke named Fabrice. Featuring an introduction by Zo Heller.

Frequently Asked Questions About The Pursuit of Love (Television Tie-In)

Radlett and Montdore Series In Order - By Nancy Mitford

0
|   0  reviews
Did you read The Pursuit of Love (Television Tie-In)? Please provide your feedback and rating to help other readers.
Write Review