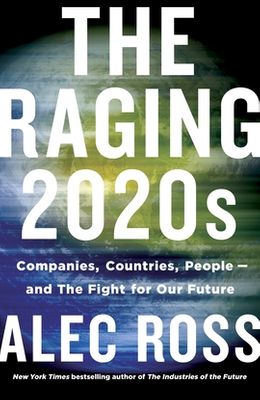 The Raging 2020s: Companies, Countries, People - And the Fight for Our Future

In the face of unprecedented global change, New York Times bestselling author Alec Ross proposes a new social contract to restore the balance of power between government, citizens, and business in The Raging 2020s.

For 150 years, there has been a contract. Companies hold the power to shape our daily lives. The state holds the power to make them fall in line. And the people hold the power to choose their leaders. But now, this balance has shaken loose. As the market consolidates, the lines between Walmart and the Halls of Congress have become razor-thin. Private companies have begun to behave like nations, and with the government bogged down in bureaucratic negotiations and partisan wars, people look to nimble, powerful firms to solve societal problems--and to be our moral standard-bearers. As Walter Isaacson said about Ross's first book, The future is already hitting us, and Ross shows how it can be exciting rather than frightening. Through interviews with the world's most influential thinkers and stories of corporate activism and malfeasance, government failure and renewal, and innovative economic and political models, Ross proposes a new social contract--one that resets the equilibrium between corporations, the governing, and the governed.

Frequently Asked Questions About The Raging 2020s: Companies, Countries, People - And the Fight for Our Future

0
|   0  reviews
Did you read The Raging 2020s: Companies, Countries, People - And the Fight for Our Future? Please provide your feedback and rating to help other readers.
Write Review

List of All Editions of The Raging 2020s: Companies, Countries, People - And the Fight for Our Future