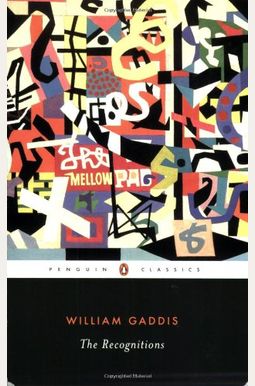 A postmodern masterpiece about fraud and forgery by one of the most distinctive, accomplished novelists of the last century.

The Recognitions is a sweeping depiction of a world in which everything that anyone recognizes as beautiful or true or good emerges as anything but: our world. The book is a masquerade, moving from New England to New York to Madrid, from the art world to the underworld, but it centers on the story of Wyatt Gwyon, the son of a New England minister, who forsakes religion to devote himself to painting, only to despair of his inspiration. In expiation, he will paint nothing but flawless copies of his revered old masters--copies, however, that find their way into the hands of a sinister financial wizard by the name of Recktall Brown, who of course sells them as the real thing. Dismissed uncomprehendingly by reviewers on publication in 1955 and ignored by the literary world for decades after, The Recognitions is now established as one of the great American novels, immensely ambitious and entirely unique, a book of wild, Boschian inspiration and outrageous comedy that is also profoundly serious and sad.

Frequently Asked Questions About The Recognitions

0
|   0  reviews
Did you read The Recognitions? Please provide your feedback and rating to help other readers.
Write Review