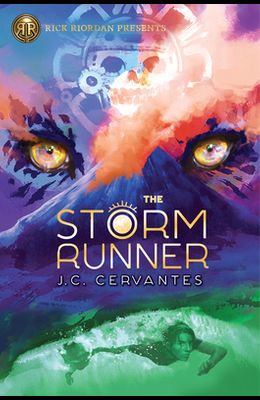 A contemporary adventure based on Mayan mythology from Rick Riordan Presents

Zane Obispo spends every day exploring the sleeping volcano in his backyard. The Beast, as he calls it, is the one place where he can escape other kids, who make fun of him because he has a limp and walks with a cane. After a twin-engine plane crashes into The Beast, a mysterious girl named Brooks shows up at Zane's doorstep, insisting that they meet at the volcano, where she will reveal a terrible secret. Zane agrees, mostly because beautiful girls like her don't usually talk to him. Brooks tells him that the volcano is actually a centuries-old prison for the Maya god of death, whose destiny is directly tied to Zane's. No way, Zane thinks. He's just a thirteen-year old nobody, and destiny or no destiny, he wants nothing to do with any of it, especially some god of death. But Brooks opens his eyes to the truth: magic, monsters, and gods are real, and Zane is at the center of an ancient prophecy that could mean the destruction of the world. Suddenly finding himself entangled in a web of dangerous secrets, Zane embarks on a quest that will take him far from home and test him to the very core. Feisty heroes, tricky gods, murderous demons, and spirited giants are just some of the pleasures that await in this fresh and funny take on Maya mythology, as rich and delicious as a mug of authentic hot chocolate.

The Storm Runner Series In Order - By J C Cervantes

0
|   0  reviews
Did you read The Storm Runner? Please provide your feedback and rating to help other readers.
Write Review