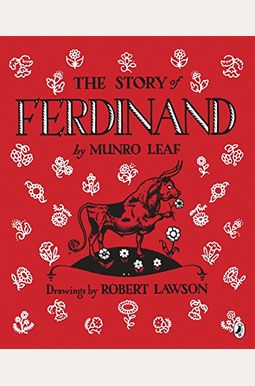 The Story Of Ferdinand

A true classic with a timeless message

All the other bulls run, jump, and butt their heads together in fights. Ferdinand, on the other hand, would rather sit and smell the flowers. So what will happen when Ferdinand is picked for the bullfights in Madrid? The Story of Ferdinand has inspired, enchanted, and provoked readers ever since it was first published in 1936 for its message of nonviolence and pacifism. In WI times, Adolf Hitler ordered the book burned in Nazi Germany, while Joseph Stalin, the leader of the Soviet Union, granted it privileged status as the only non-communist children's book allowed in Poland. The preeminent leader of Indian nationalism and civil rights, Mahatma Gandhi--whose nonviolent and pacifistic practices went on to inspire Civil Rights leader Martin Luther King, Jr.--even called it his favorite book. The story was adapted by Walt Disney into a short animated film entitled Ferdinand the Bull in 1938. Ferdinand the Bull won the 1938 Academy Award for Best Short Subject (Cartoons).

Frequently Asked Questions About The Story Of Ferdinand

5
|   10  reviews
Did you read The Story Of Ferdinand? Please provide your feedback and rating to help other readers.
Write Review
1

List of All Editions of The Story Of Ferdinand