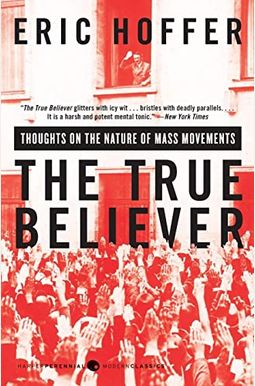 The True Believer: Thoughts on the Nature of Mass Movements

Its theme is political fanaticism, with which it deals severely and brilliantly. --New Yorker

A stevedore on the San Francisco docks in the 1940s, Eric Hoffer wrote philosophical treatises in his spare time while living in the railroad yards. The True Believer--the first and most famous of his books--was made into a bestseller when President Eisenhower cited it during one of the earliest television press conferences.

Called a brilliant and original inquiry and a genuine contribution to our social thought by Arthur Schlesinger, Jr., this landmark in the field of social psychology is completely relevant and essential for understanding the world today as it delivers a visionary, highly provocative look into the mind of the fanatic and a penetrating study of how an individual becomes one.

In times of crisis, the great works of philosophy help us make sense of the world. The Harper Perennial Resistance Library is a special five-book series highlighting short classic works of independent thought that illuminate the nature of truth, humanity's dangerous attraction to authoritarianism, the influence of media and mass communication, and the philosophy of resistance--all critical in understanding today's politically charged world.

Frequently Asked Questions About The True Believer: Thoughts on the Nature of Mass Movements

0
|   0  reviews
Did you read The True Believer: Thoughts on the Nature of Mass Movements? Please provide your feedback and rating to help other readers.
Write Review

List of All Editions of The True Believer: Thoughts on the Nature of Mass Movements