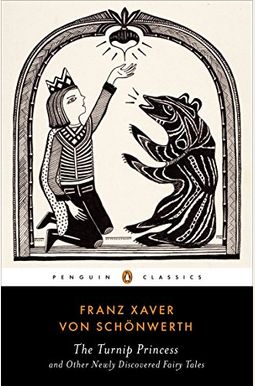 The Turnip Princess And Other Newly Discovered Fairy Tales

Move over, Cinderella: Make way for the Turnip Princess And for the Cinderfellas in these stories, which turn our understanding of gender in fairy tales on its head.

With this volume, the holy trinity of fairy tales--the Brothers Grimm, Charles Perrault, and Hans Christian Andersen--becomes a quartet. In the 1850s, Franz Xaver von Sch nwerth traversed the forests, lowlands, and mountains of northern Bavaria to record fairy tales, gaining the admiration of even the Brothers Grimm. Most of Sch nwerth's work was lost--until a few years ago, when thirty boxes of manu­scripts were uncovered in a German municipal archive. Now, for the first time, Sch nwerth's lost fairy tales are available in English. Violent, dark, and full of action, and upending the relationship between damsels in distress and their dragon-slaying heroes, these more than seventy stories bring us closer than ever to the unadorned oral tradition in which fairy tales are rooted, revolutionizing our understanding of a hallowed genre. For more than seventy years, Penguin has been the leading publisher of classic literature in the English-speaking world. With more than 1,500 titles, Penguin Classics represents a global bookshelf of the best works throughout history and across genres and disciplines. Readers trust the series to provide authoritative texts enhanced by introductions and notes by distinguished scholars and contemporary authors, as well as up-to-date translations by award-winning translators.

Books like The Turnip Princess And Other Newly Discovered Fairy Tales

0
|   0  reviews
Did you read The Turnip Princess And Other Newly Discovered Fairy Tales? Please provide your feedback and rating to help other readers.
Write Review