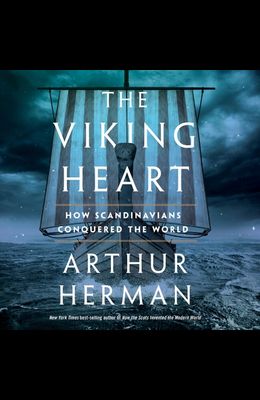 The Viking Heart Lib/E: How Scandinavians Conquered the World

A stirring investigation of the Scandinavian influence on our times, both past and present. You won't look at the world the same way again.--Neal Bascomb, New York Times best-selling author of The Winter FortressFrom a New York Times best-selling historian and Pulitzer Prize finalist, a sweeping epic of how the Vikings and their descendants have shaped history and America Scandinavia has always been a world apart. For millennia Norwegians, Danes, Finns, and Swedes lived a remote and rugged existence among the fjords and peaks of the land of the midnight sun. But when they finally left their homeland in search of opportunity, these wanderers--including the most famous, the Vikings--would reshape Europe and beyond. Their ingenuity, daring, resiliency, and loyalty to family and community would propel them to the gates of Rome, the steppes of Russia, the courts of Constantinople, and the castles of England and Ireland. But nowhere would they leave a deeper mark than across the Atlantic, where the Vikings' legacy would become the American Dream.

Frequently Asked Questions About The Viking Heart Lib/E: How Scandinavians Conquered the World

0
|   0  reviews
Did you read The Viking Heart Lib/E: How Scandinavians Conquered the World? Please provide your feedback and rating to help other readers.
Write Review

List of All Editions of The Viking Heart Lib/E: How Scandinavians Conquered the World