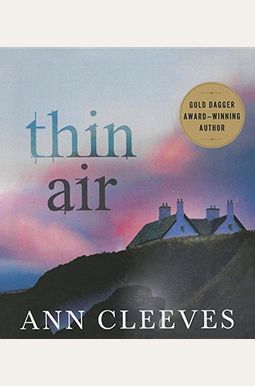 Shortlisted for Scottish Crime Novel of the Year

In Thin Air, featuring Ann Cleeves' beloved Inspector Jimmy Perez, a group of old university friends leave the bright lights of London and travel to Shetland to celebrate the marriage of one of their friends. But, one of them, Eleanor, disappears--apparently into thin air. Detectives Jimmy Perez and Willow Reeves are dispatched to investigate. Before she went missing, Eleanor claimed to have seen the ghost of a local child who drowned in the 1920s. Jimmy and Willow are convinced that there is more to Eleanor's disappearance than they first thought. Is there a secret that lies behind the myth? One so shocking that someone would kill--many years later--to protect? Ann Cleeves is also the author of the Vera Stanhope series. Vera, the television show based on the Vera Stanhope series and available on Netflix, is now filming its fifth season. The Shetland Island TV series is currently being shown to critical acclaim by the BC, and is airing on select PBS stations in the U.S.