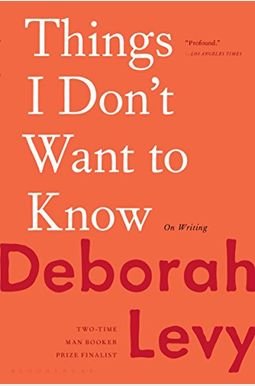 Things I Don't Want to Know: On Writing

To be published simultaneously with Black Vodka, the Man Booker Prize-shortlisted writer's new collection of short stories, a shimmering jewel of a book about writing.

Blending personal history, gender politics, philosophy, and literary theory into a luminescent treatise on writing, love, and loss, Things I Don't Want to Know is Deborah Levy's witty response to George Orwell's influential essay Why I Write. Orwell identified four reasons he was driven to hammer at his typewriter-political purpose, historical impulse, sheer egoism, and aesthetic enthusiasm-and Levy's newest work riffs on these same commitments from a female writer's perspective.

As she struggles to balance womanhood, motherhood, and her writing career, Levy identifies some of the real-life experiences that have shaped her novels, including her family's emigration from South Africa in the era of apartheid; her teenage years in the UK where she played at being a writer in the company of builders and bus drivers in cheap diners; and her theater-writing days touring Poland in the midst of Eastern Europe's economic crisis, where she observed how a soldier tenderly kissed the women in his life goodbye.

Spanning continents (Africa and Europe) and decades (we meet the author at seven, fifteen, and fifty), Things I Don't Want to Know brings the reader into a writer's heart.

Frequently Asked Questions About Things I Don't Want to Know: On Writing

0
|   0  reviews
Did you read Things I Don't Want to Know: On Writing? Please provide your feedback and rating to help other readers.
Write Review

List of All Editions of Things I Don't Want to Know: On Writing