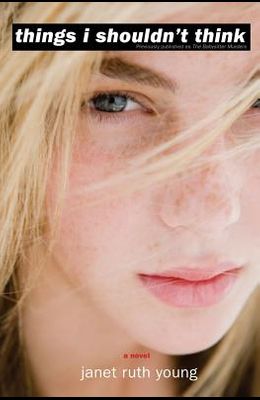 An unnerving novel about a seventeen-year-old girl who suffers from a form of OCD that makes her think dark, disturbing thoughts.

Seventeen year-old Dani Solomon is not a violent person, but she has violent thoughts. Cruel thoughts. Harmful thoughts. Dangerous thoughts. She thinks about calling her gay best friend a freak. She thinks about knocking her mother off a ladder.
She thinks about killing Alex, the child she babysits.
To protect Alex from herself, Dani tells his mother. And it doesn't take long for the story to leak, for Dani to be persecuted and ostracized from her community and peers for a crime she hasn't even committed.
Janet Ruth Young writes convincingly about mental illness. Dani's disorder is based on a real form of OCD and her treatment incorporates actual psychiatric methods, making Things I Shouldn't Think (formerly published as The Babysitter Murders) an authentic read that is impossible to put down.

0
|   0  reviews
Did you read Things I Shouldn't Think? Please provide your feedback and rating to help other readers.
Write Review

List of All Editions of Things I Shouldn't Think