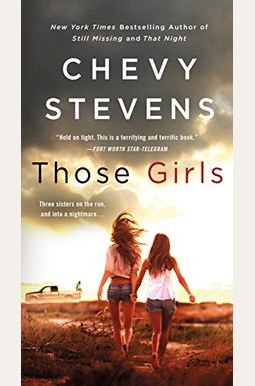 Hold on tight. This is a terrifying and terrific book. -Fort Worth Star-Telegram

If you are looking for a riveting mix of survival, redemption and sheer terror, Those Girls is not to be missed. -Bookreporter

Life has never been easy for the three Campbell sisters. Jess, Courtney, and Dani live on a remote ranch in western Canada where they work hard and try to stay out of the way of their father's temper. One night, a fight gets out of hand and the sisters are forced to go on the run, only to get caught in an even worse nightmare when their truck breaks down in a small town. As events spiral out of control, they find themselves in a horrifying situation and are left with no choice but to change their names and create new lives.

Eighteen years later, they are still trying to forget what happened that summer. But when one of the sisters goes missing, followed closely by her niece, they are pulled back into the past. And this time there's nowhere left to run. With Those Girls Chevy Stevens presents her most visceral thriller yet: an unforgettable portrait of desperation, loyalty, and evil. A story of survival.and revenge. Such an engrossing, suspenseful tale . Highly recommended for fans of the genre who relish nail-biting suspense as well as stories about the endurance of family and the human spirit. -Library Journal (starred)

Frequently Asked Questions About Those Girls

0
|   0  reviews
Did you read Those Girls? Please provide your feedback and rating to help other readers.
Write Review