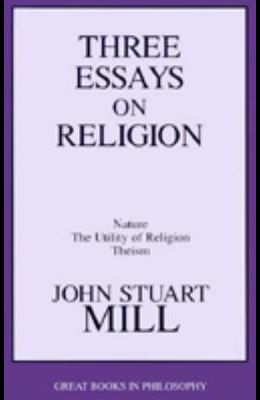 Three Essays on Religion: Nature, the Utility of Religion, Theism

The Design argument is wholly grounded on experience. Certain qualities, it is alleged, are found to be characteristic of such things as are made by an intelligent mind for a purpose. The order of Nature, or some considerable parts of it, exhibit these qualities in a remarkable degree. We are entitled, from this great similarity in the effects, to infer similarity in the cause, and to believe that things which it is beyond the power of man to make, but which resemble the works of man in all but power, must also have been made by Intelligence, armed with a power greater than human. -from Theism One of the foremost figures of Western intellectual thought in the late 19th century, John Stuart Mill offered up examinations of human rights, morality, personal and societal responsibilities, and the striving for individual happiness that continue to impact our philosophies, both private and political, to this day. In these three essays, not published until 1874, a year after the author's death, Mill explores concepts of religious belief that have shaped modern atheism and humanism for more than a century. In Nature, The Utility of Religion, and Theism, Mill criticizes idealized and uncritical belief in a benevolent and omnipotent deity, challenges traditional assumptions for the existence of God, and challenges believers to come to a new understanding of the purpose of religion that puts the needs of people first. Powerfully and compellingly argued, this is essential reading for those wishing to understand the basis for today's critiques of religion.

Books like Three Essays on Religion: Nature, the Utility of Religion, Theism

0
|   0  reviews
Did you read Three Essays on Religion: Nature, the Utility of Religion, Theism? Please provide your feedback and rating to help other readers.
Write Review

List of All Editions of Three Essays on Religion: Nature, the Utility of Religion, Theism