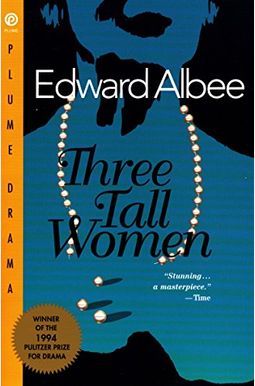 WINER OF THE PULITZER PRIZE FOR DRAMA
Soon to be back on Broadway in a revival directed by Joe Mantello, starring two-time Oscar winner Glenda Jackson and Tony-nominee Laurie Metcalf

Earning a Pulitzer and Best Play awards from the Evening Standard, Critics Circle, and Outer Critics Circle, among others, when it premiered, Edward Albee has, in Three Tall Women, created a masterwork of modern theater. As an imperious, acerbic old woman lies dying, she is tended by two other women and visited by a young man. Albee's frank dialogue about everything from incontinence to infidelity portrays aging without sentimentality. His scenes are charged with wit, pain, and laughter, and his observations tell us about forgiveness, reconciliation, and our own fates. But it is his probing portrait of the three women that reveals Albee's genius. Separate characters on stage in the first act, yet actually the same everywoman at different ages in the second act, these tall women lay bare the truths of our lives--how we live, how we love, what we settle for, and how we die. Edward Albee has given theatergoers, critics, and students of drama reason to rejoice.

0
|   0  reviews
Did you read Three Tall Women? Please provide your feedback and rating to help other readers.
Write Review